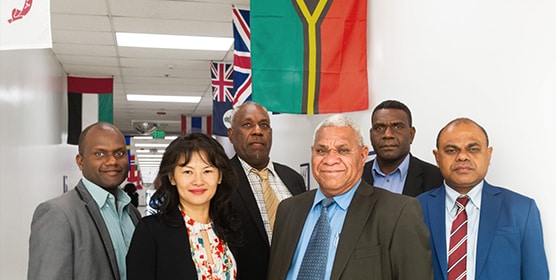 Senior members of the Vanuatu Government, trade and tourism offices recently visited the Boeing satellite factory to mark the construction milestone of Kacific-1, a next-generation satellite which will stream high-speed low-cost broadband to Vanuatu from next year.

The satellite is owned by Kacific, a private company registered in Vanuatu, and when it launches in 2019 it will be the first satellite owned by a Vanuatu-registered company. The construction has moved into initial testing stages, and the party were involved in discussions on how satellite broadband can bring both economic and social benefit to the country.

“For nations like ours with many islands, satellite broadband is an important technology to connect our communities and open opportunities in education, healthcare, commerce and tourism,” said Deputy Prime Minister, Bob Loughman. “We are also considering the effects of climate change and considering how we respond to environmental changes to secure a prosperous and safe future for younger generations.”

Kacific-1 will stream high-speed broadband to the Pacific islands, which can be used in a range of areas from education and healthcare to disaster response and tourism.

Boeing has started integration and testing of the Kacific-1 payload, which consists of the communications electronics. It has also started integration and testing of the satellite platform which includes the power and propulsion systems. The communications antennas are being prepared for range tests starting in the next few weeks.

In recent months Kacific has employed dedicated sales representatives to establish more service provider relationships to grow broadband services in Asia, Melanesia, Micronesia and Polynesia leading up to the launch of Kacific-1 in 2019.