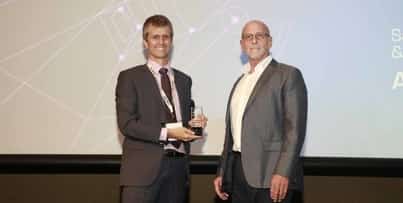 Kacific’s Founder and CEO Christian Patouraux has been named Satellite Executive of the Year by the Asia-Pacific Satellite Communications Council (APSCC).

Christian was recognised at the APSCC’s 16th annual awards ceremony in Bangkok. In accepting the award, Patouraux said that future success of the satellite industry will require a collective effort and rallied for the industry to make it easier for more specialised, independent operators to gain access.

Research by the World Bank has revealed that improved internet access and connectivity could bring in more than 5 billion dollars to the Pacific economy and create close to 300,000 new jobs by 2040.

Once launched in December 2019, the company’s high-throughput satellite Kacific1, could potentially reach 600 million people in nations with low internet penetration and difficult geographies and be a game changer for communities which have to date only known the internet as an expensive and unattainable resource.

Patouraux said: “As much as I’d like to take sole credit for the achievements at Kacific, this would not have been possible without the team of professionals at Kacific, who work hard every day to bring our vision to life, and to help bring affordable internet access to underserved communities around the region.

“This award is therefore a very important recognition of the work that we do every day at Kacific, and a testament that our industry supports new entrants and a wider diversity of specialised growth. This is a new hope, and this means a lot to me”.