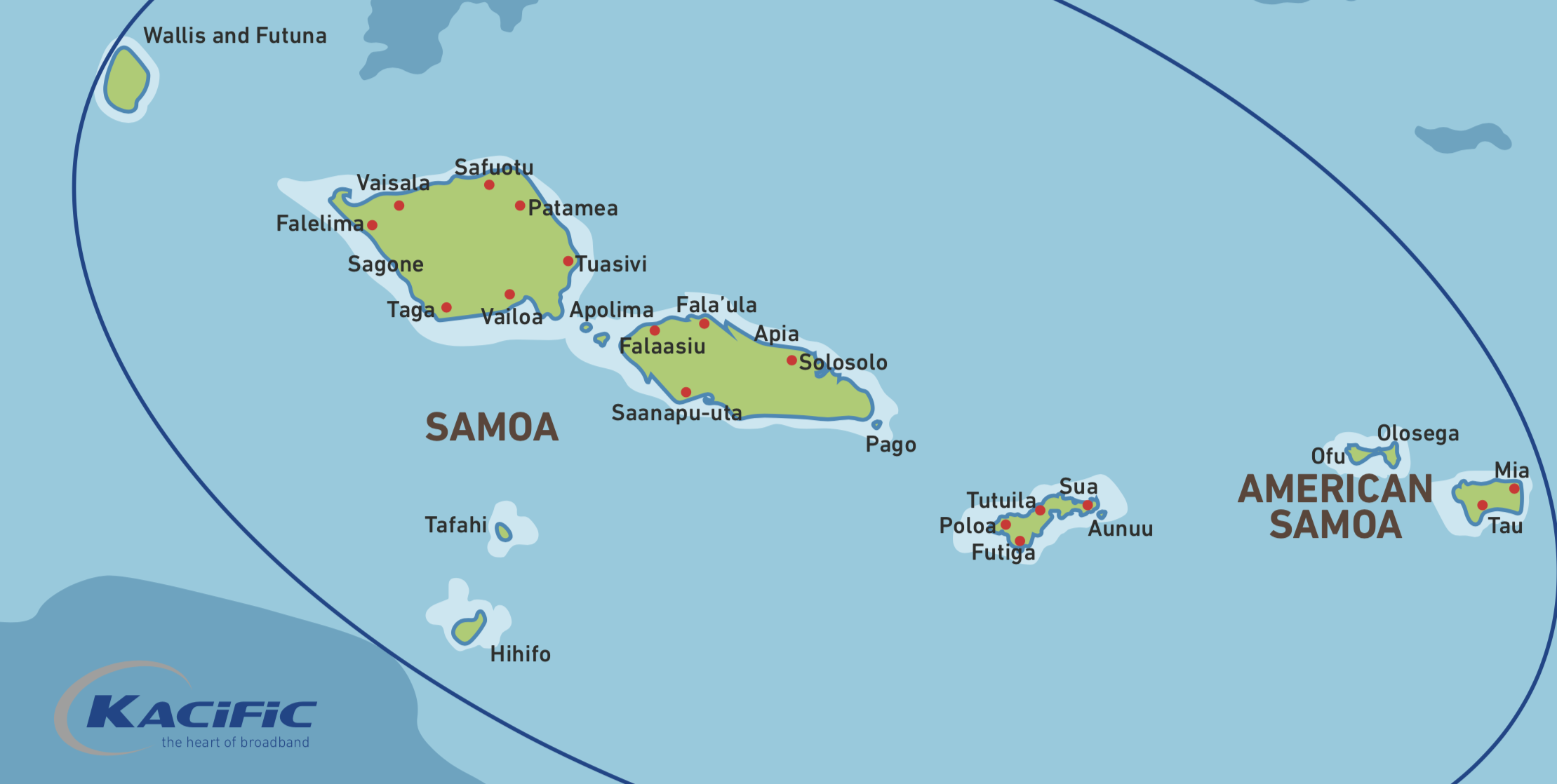 American Samoa is an U.S territory with a population of just over 55,000 people, living across seven volcanic islands and coral atolls in the South Pacific. A recent fibre outage during the Covid-19 pandemic has shown the importance of satellite redundancy systems.

The eastern island of Ofu, part of the Manu’a group, suffered a cable outage in March 2020. Although Ofu is connected with a subsea cable system to American Samoa’s main island 100 km away, two of the three branches of the looping cable system serving the Manu’a group were damaged by rough seas in separate incidents two weeks and 90 kilometers apart.

To restore service, ASTCA implemented a backup satellite option provided by Kacific. ASTCA purchased a small satellite dish (1.2m in size) from the neighboring country of Samoa. The disassembled dish was picked up in Samoa and transported to Ofu (200 kms away) by a small dive boat.  After receiving the equipment on site at Ofu, it took only a few hours for ASTCA engineers to install the VSAT and establish a stable uplink and downlink connection at more than 90Mbps, communicating with Kacific’s Singapore-based Network Operations Centre.

“To have two very reliable links go down within weeks of each other for independent causes, we were really not ready for that,” said Lewis Wolman, CEO of American Samoa Telecommunications Authority (ASTCA). “We never imagined that we could lose both legs of the subsea cable system and had neglected to provide satellite redundancy.”

ASTCA had to act quickly to restore communications with Ofu Island. The drive for connectivity was made more urgent by the simultaneous public health danger of Covid-19. The deployment, however, was much more difficult both logistically because of reduced transport options, and due to additional border regulations of both the governments of American Samoa and the Independent State of Samoa. The light, compact and simple 1.2m high-speed Kacific VSAT was critical to allow fast transportation and installation of that system.

“ASTCA is a public agency (state owned enterprise), so we have a fundamental commitment to universal access and full connectivity to all of our islands. The population of Ofu is approximately 500 people. We don’t use the word “only”, because our commitment is to everybody,” continued Lewis. “The other reason is that we were then – and are now – in the middle of an emergency declaration. We could not communicate at a time we were having a public health emergency, that’s obviously unacceptable.”

Fa’asala Augafa, ASTCA CTO, added, “given the landscape and geolocation of the remote islands, we need satellite. Whether it is primary or secondary, we have yet to determine that. Our experience has taken away that thinking that cable is stable and will always be there.”

Kacific’s Fibre Back Up solution is designed for large enterprises and businesses, government agencies and emergency services, who need access to broadband internet 24/7 for critical communications and internet-based applications. This service is highly scalable, giving you a secure, stable high-speed connectivity delivered over an easy-to-install satellite antenna. Kacific offer this service either as a standalone solution, or a value-added solution, which can be built into the existing network.