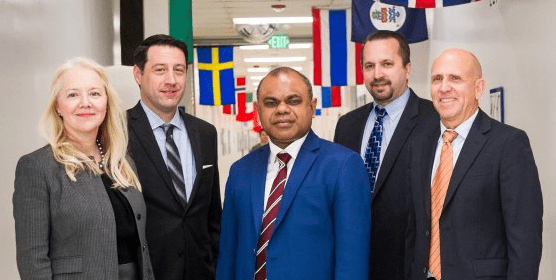 Los Angeles, USA – 22 March 2018 — The Republic of Vanuatu has become the first Pacific Island nation to have its flag hung in the prestigious Hall of Flags at the Boeing Satellite Systems International (Boeing) factory in Los Angeles, California. Kacific-1 will be Vanuatu’s first commercial satellite, making the Republic the only Pacific Island nation with an active satellite.

“The launch of Kacific-1 will place Vanuatu at the forefront of satellite innovation amongst Pacific nations,” said Ambassador Tevi. “I am delighted to see the development of this first commercial satellite, which will soon service the dispersed Pacific region. Satellite broadband will play an important part in assisting Vanuatu to achieve both economic and social goals for current and future generations. This is a historic moment and is a critical partnership that will enable Vanuatu to achieve its 2030 Agenda on Sustainable Development Goals.”

Boeing installs a national flag to mark the commencement of manufacturing of a first satellite of a designated nation of origin. The satellite, Kacific-1, will be launched into space by Vanuatu-registered company Kacific Broadband Satellites in 2019. It will provide affordable broadband services to the Pacific, including every island of Vanuatu, and South-East Asia.

Started one year ago with an extensive design and parts procurement phase, the satellite construction has recently undergone its critical design review and physical integration is now underway at the Boeing Satellite Systems factory. Leading space technology company SpaceX will provide the launch service aboard a Falcon 9 rocket.

“Moving into the satellite manufacturing phase is a decisive step towards the realisation of a totally connected Pacific region,” said Kacific CEO, Christian Patouraux. “Vanuatu is at the heart of this inclusive digital connectivity project for the Pacific communities and beyond.”

Kacific has undertaken several connectivity pilot programmes with other satellites on Vanuatu’s remote islands. The communities involved are embracing the internet for healthcare, education, information gathering and speaking with distant relatives.

“Vanuatu is showing the world that there’s a thirst and a need for real, affordable broadband, even in remote parts of the Pacific,” said Patouraux.