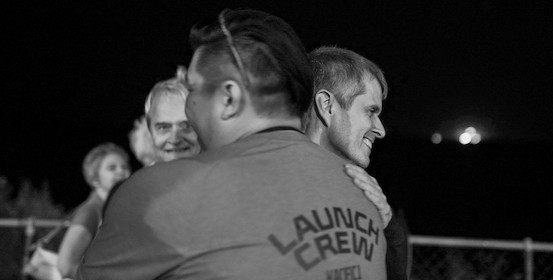 From around the time the satellite got completed at the Boeing factory around the end of October 2019, the whole company started focusing on the launch activities.

It felt like time stood still as we feverishly organised the activities around the launch that was planned for mid-December.

In the 6 and a half years since its inception, the Kacific journey had already touched the lives of a large group of people – staff, families, consultants, investors, lenders, insurers, suppliers, customers. Hence, we decided to extend an invitation to attend the launch to most of these stakeholders and their families. Not surprisingly, we received a considerable number of positive responses and by November 2019, we were expecting an attendance of almost 200 guests at the launch.

Organising several days of activities for such a large group was very overwhelming for our small team.

To ensure the event would create memorable social bonds, we rented a number of large villas in a vacation resort in Orlando, where all our guests would stay together. This ended up being a very successful part of our plan.

From the moment we arrived in Orlando, the world started becoming a bit unreal to me. There we were: the culmination of more than 6 years of hard work and hopefully finally the transition into the business I had worked so hard for.

The villas started filling up with lots of people, some of whom I had not seen in years. In my villa, I was surrounded by my wife, my two young sons, my parents, my brother Stephane, a few cousins, some of my closest old friends Carlos, Sebastien, Paul and even my great former university professor. The days went by while anxiously waiting for the regular updates on progress from the launch facility. The ambience was amazingly warm and bonding while buzzing with great expectations. On December 13th, the Falcon 9 rocket performed a last test firing of its engines without the satellite, immediately followed by satellite mating activities.

Storms were brewing over the launch site on the 14th of December but a launch window in the weather forecast seemed possible on the 15th and the 16th. SpaceX raced to make it for a launch on Sunday 15th. Unfortunately, we quickly heard that it would not be possible to make it for that first window and the launch would be delayed by one day. It was now set for 7h10pm on the Monday 16th of December. The pressure was immense. Not only were we eager to launch on time, but also we wanted to make sure that all our guests from around the world would get to see the launch and not have to go back home disappointed.

The rocket with its Kacific1 satellite payload started rolling out to the launch site, before dawn on the 16th of December. The SpaceX and Boeing teams had worked around the clock to try to make the Monday night launch window.

In Orlando, it was a beautiful sunny day with high clouds. We lined up, dressed in Kacific “Launch Crew” t-shirts, to board buses on our way to Cape Canaveral. The excitement and anticipation were at its highest; yet, I remember feeling relaxed because for once, things were out of my hands at this point and were simply going to unfold one way or another.

At Cape Canaveral, we stopped for a lunch with a former astronaut, organised by SpaceX. My 4-year-old son didn’t miss the chance to ask him whether there were bad aliens on other planets. The astronaut patiently answered that we have yet to discover life on other planets.

We took a bus to go see the rocket up close. As we made our way to the launch pad, the discussions became very lively and excited as we saw the silhouette of the rocket growing in the distance. But then, as the bus drew near the launch pad, we all fell silent in sheer awe. Just a few soft: “pfew”,.. “unbelievable”… As we got off in the grassy patch in front of the launch pad fence, it became my most emotional moment of the whole Kacific development journey to date. Seeing this magnificent 70-meter tall rocket engulfed in plumes of nitrogen gas, boasting a large, conspicuous Kacific logo on its top brought tears of joy and pride to my eyes. There was a sense of harmony, achievement and purpose between all the people present there. 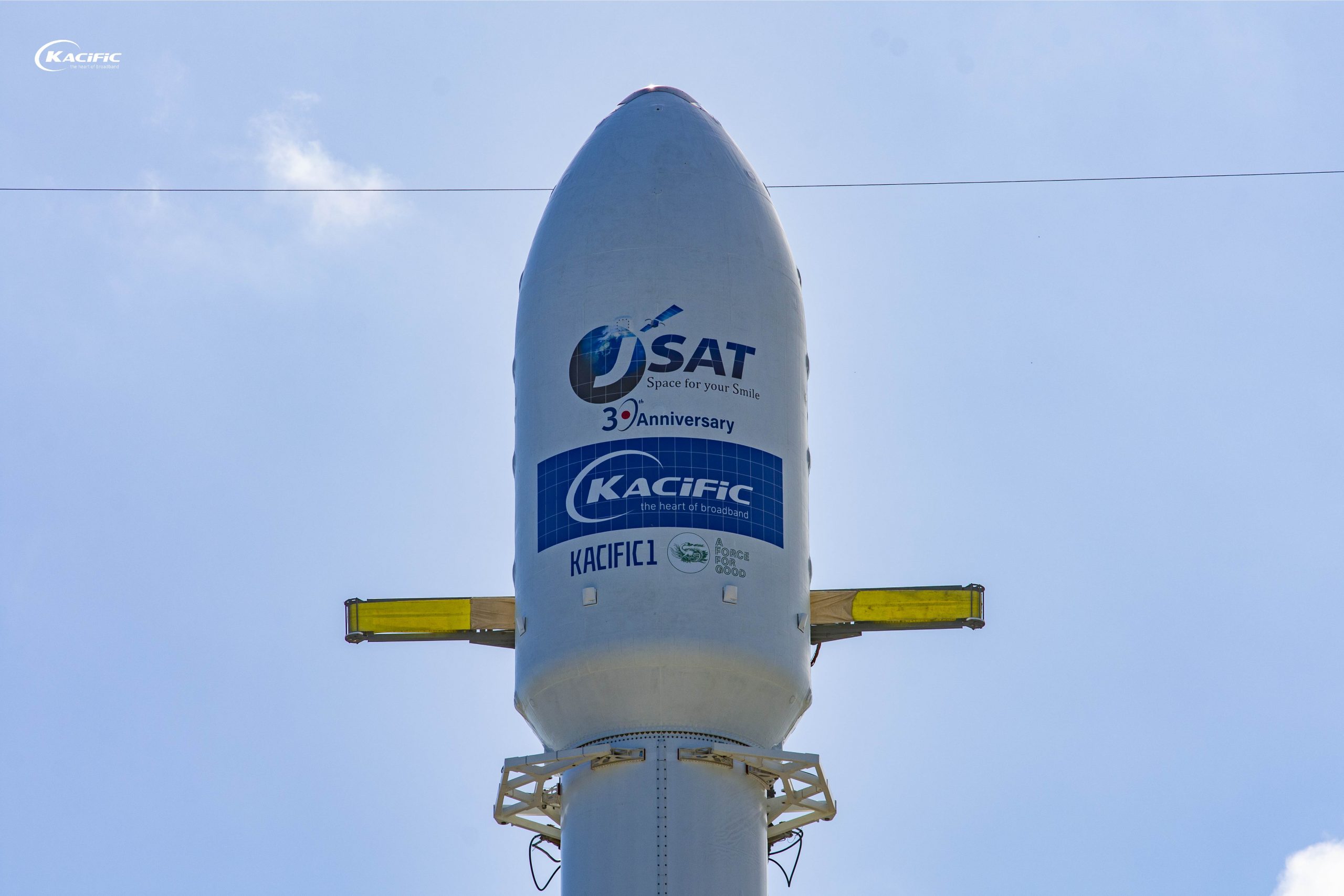 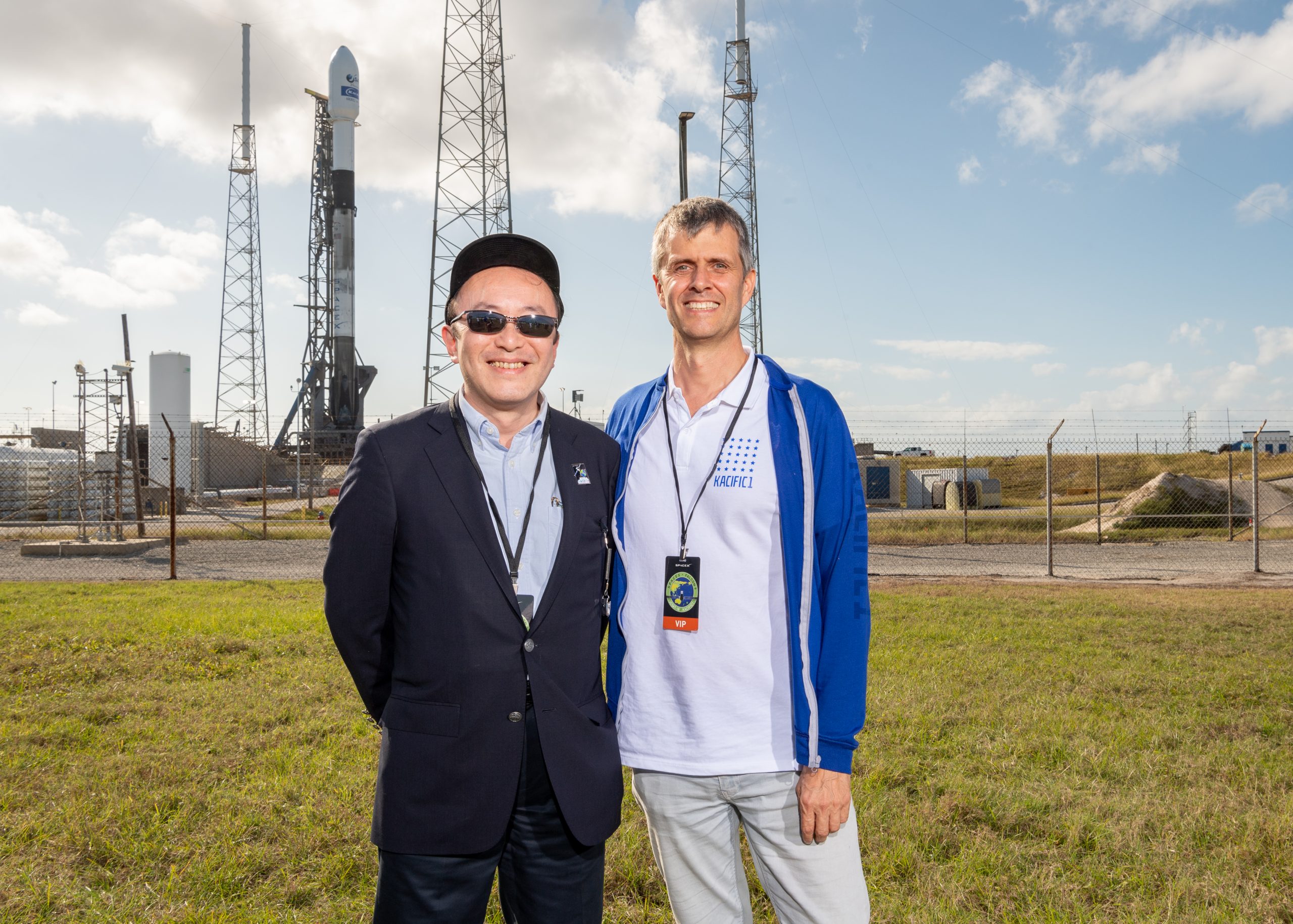 Many of them had worked so hard for so many years to have the privilege of standing in that little meadow in front of that mechanical beast about to carry all their hopes into outer space. This included our dear Japanese friends from JSAT like Kenji, Nao and Yohei who had commissioned the satellite together with us at Boeing, in one of the most sophisticated partnerships of all time in our industry. We were all beaming from ear to ear. We hugged and took countless pictures. It was hard to leave the site because these were probably some of the most memorable 20 minutes of my life, almost at par with the births of my two sons. Incredible. Surreal. 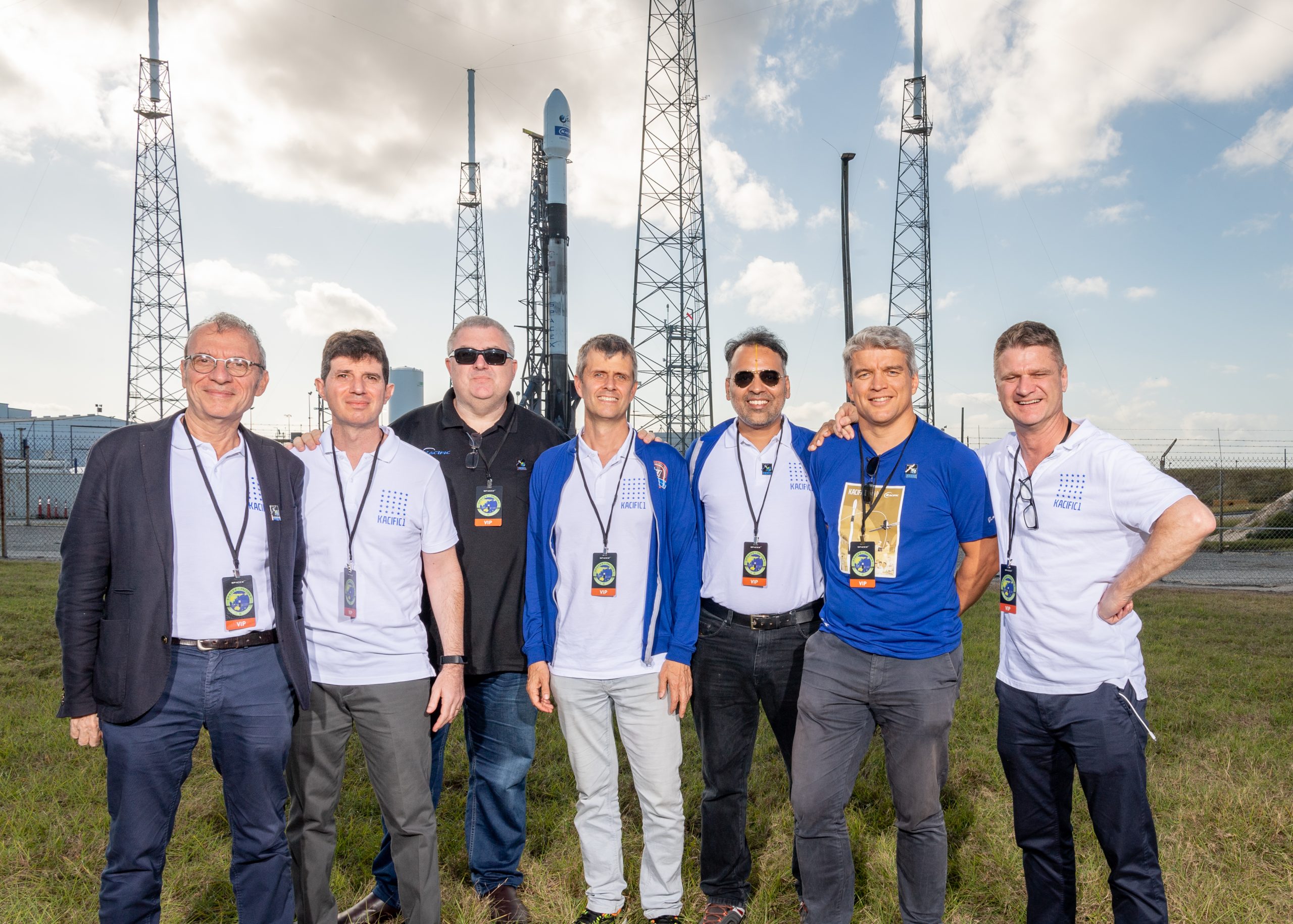 After a couple of press interviews, I arrived around 5h30pm at the viewing location, some 9km away from the launch pad at a site called Saturn V, just next to a real Saturn V moon rocket. Some bleachers were ready and the crowd of guests started to swell as the sun was setting. I gave a speech to the audience about 30minutes before the launch window would open, pondering upon this very special 6-year journey that got us there.

As night fell, we waited. I kept my family close to me as the countdown commenced, and the pressure of the launch mounted with it.

At T-15 minutes, my phone rang. It was Adrian, our deputy CTO. “Mate,” he said with a pause. I knew what was going to follow was not going to be what I would want to hear. “I think we may have a delay”. My heart sank. He went on to tell me that a panel of experts was discussing some signature seen on the satellite telemetry. Our CTO Bob was discussing with them. Yet, while he spoke, I saw that the countdown kept going. The situation on the phone was confusing. I knew that if our launch did not happen right then, we would not get another chance in the next couple of days, due to the weather. The discussion on the phone with Adrian intensified and I got absorbed into it. 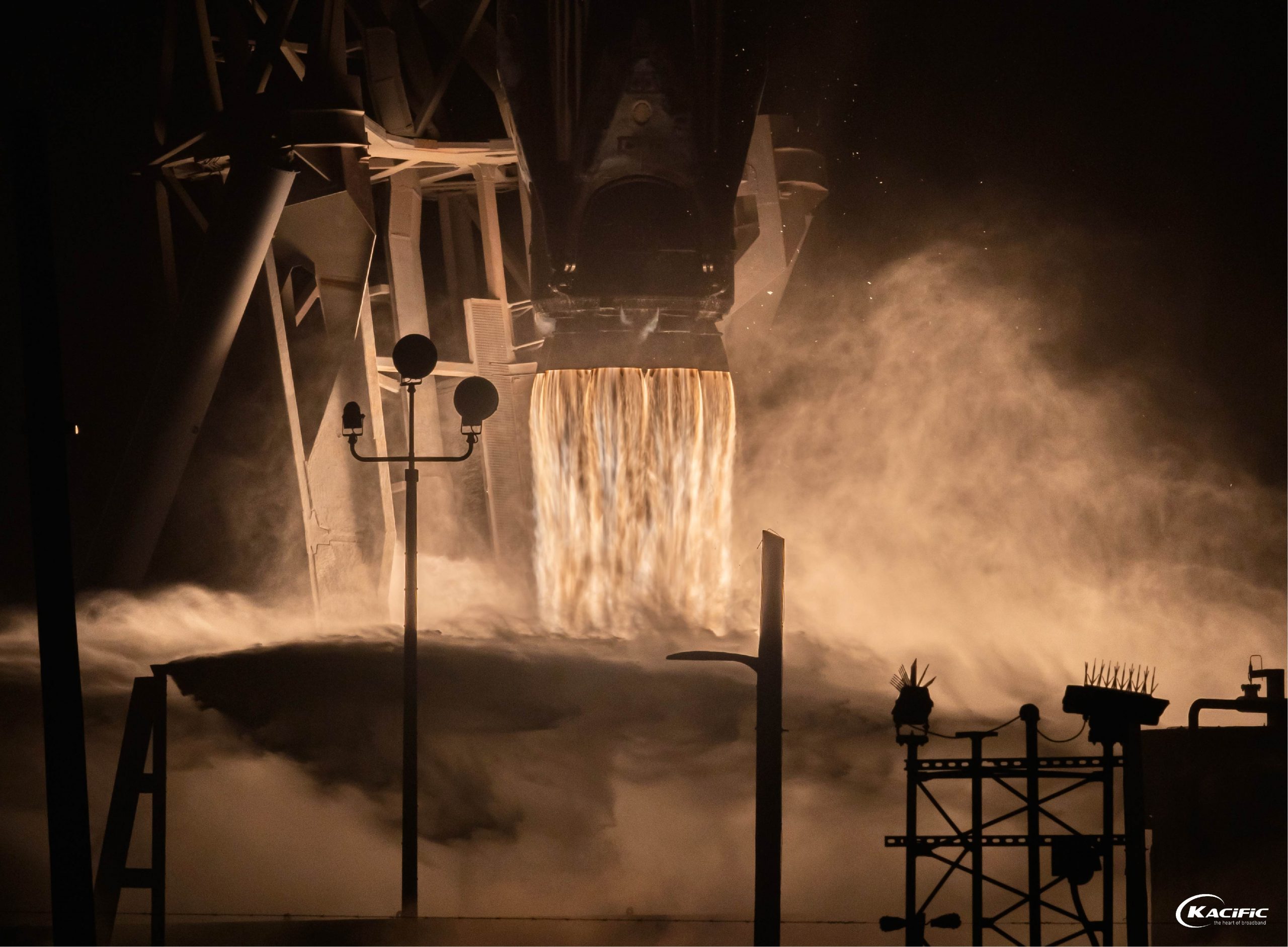 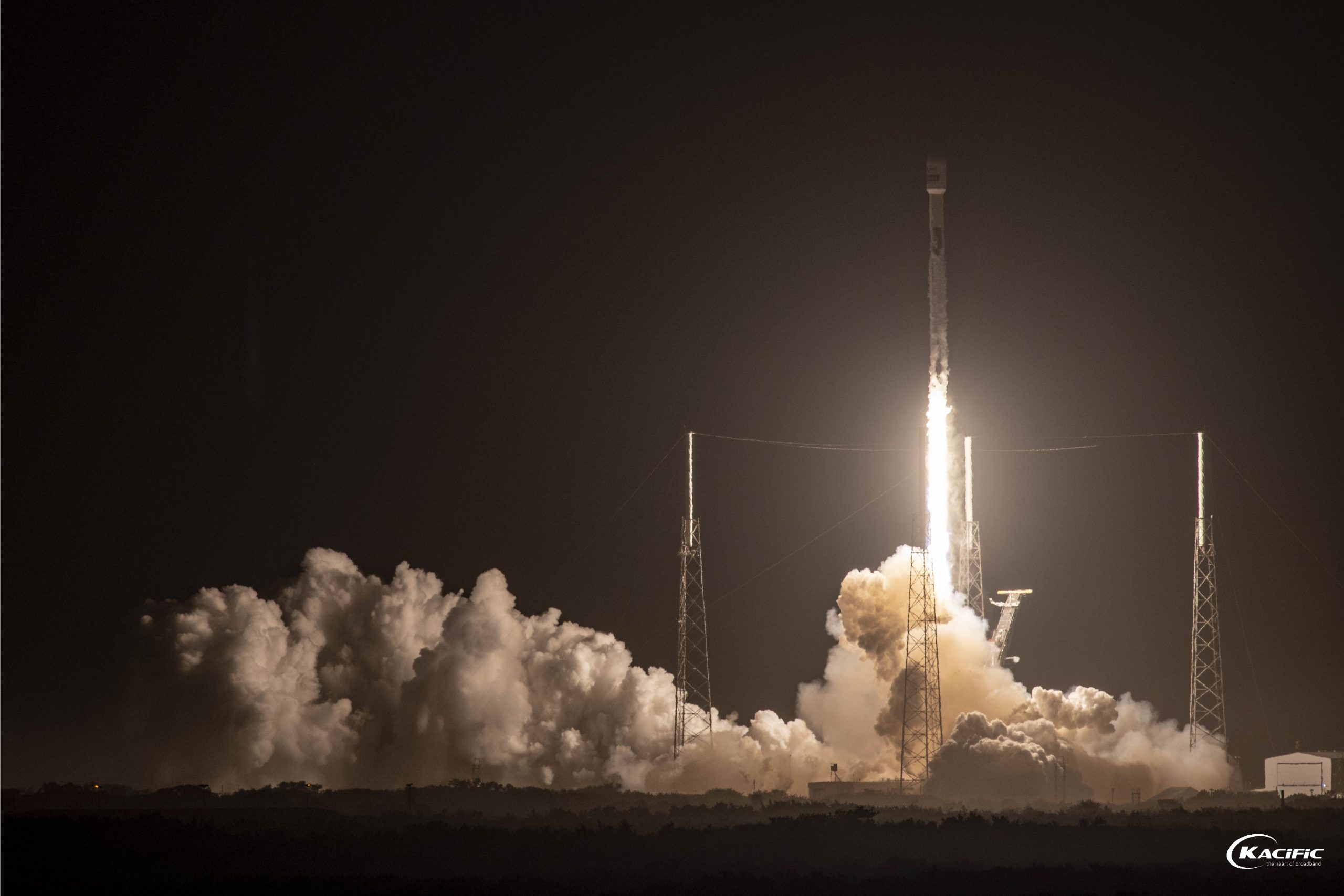 Then in a sudden snap back to reality, I heard the crowd chant: …. 5..4..3..2..1… I saw a blinding light at the horizon and saw the Falcon 9 liftoff followed by a deafening pulsing sound. I hung up the phone thinking.. oh well…

Then I felt a piercing pain on my left shoulder. It was my mother’s fingernails digging into it as she repeated “it’s going to make it! it’s going to make it!..” looking at the rocket accelerating through the Florida night sky, hurtling far above the Atlantic Ocean in a perfect trajectory. What a sight. As the vehicle entered the high atmosphere, the exhaust flames, growing wider, were so bright that they seemed to light up the entire Florida peninsula. Within a couple of minutes, it disappeared over the horizon.

It turns out, the signature that would have resulted in a delay of our launch had in fact been just a telemetry glitch.

We then all went into the large adjacent tent to continue following the launch that was broadcast there on a widescreen. A rapid succession of events ensued, second stage engine chill, main engine cut-off, first stage separation, second stage engine ignition. After the second stage engine turned off, the vehicle started to drift for about 20 minutes waiting for the engine would ignite again one last time.

At that point, some of our colleagues in Singapore were having a little launch party at our office and called for me to say a few words to their guests that included the French Ambassador to Singapore. Later I realised that I must have sounded very silly. I was totally awestruck by what had just happened. All I could do at that point was smile and wave. Not a word managed to come out of my mouth.

After about 20 minutes, I saw the rocket second stage vacuum engine enter its second burn as it once again showed its bright orange hue on the TV screen broadcasting it. Then came this jaw-dropping sight of our dear Kacific1 satellite, this 6,800 kg behemoth, separating from the rocket and gently floating away weightlessly into the darkness of empty space… on its way to change the lives of hundreds of thousands of people on earth by connecting them together.

We then all boarded buses and went to Cocoa Beach Hilton for a relaxing after-launch evening.

That night, I slept the best I had in years. That night was transformational; the birth of a new reality. The “day after”, when I woke up in the morning, Kacific had launched its satellite and the company was finally going to do what it was meant to do. I rolled up my sleeves to get to work.

Christian Patouraux is the founder and CEO of Kacific Broadband Satellites Group.  See more photos from the Kacific1 launch here.