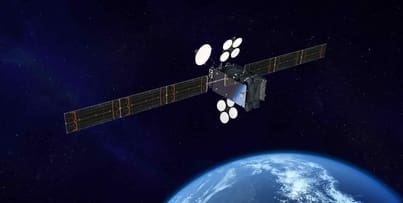 Singapore, 6 December 2019 – As it readies for its first satellite launch next week, Kacific Broadband Satellites Group (Kacific) today announced that it has closed credit facilities totalling US$160 million with a group of financial institutions including the Asian Development Bank (ADB) and GuarantCo.

Taken altogether, these credit facilities secure long-term financing that enables Kacific to repay short term facilities used to fund the construction of the Kacific1 payload and the associated infrastructure and launch costs.

The financing reflects the recognition, by Asian Development Bank and GuarantCo, of the impact Kacific1 will have on development within the region and the benefits that Kacific1 will bring to un- and under-served communities in Asia and the Pacific, particularly in rural and remote areas of small island nations in the Pacific, and larger island nations like Indonesia and the Philippines.

The financing is underpinned by the large number of customers, in 25 nations, who have already signed up to Kacific’s service in anticipation of the Kacific1 satellite commencing operation in early 2020.

“The support from GuarantCo, ADB, and private investors will be pivotal in providing the long-term certainty that will allow Kacific to transition seamlessly into operational mode, following the launch of Kacific1”, says Kacific Founder and CEO, Christian Patouraux. “Their commitment will lead to life-changing outcomes for millions living in remote communities, bringing them fast, affordable internet services that will transform education, healthcare, economic development and social inclusion.”

“We are proud to have made a contribution to the Kacific satellite launch which will provide reliable, affordable and high-speed broadband access to people living in remote areas in Asia-Pacific and encourage economic growth in some of the lowest income countries in the world”, says Lasitha Perera, CEO at GuarantCo, a Private Infrastructure Development Group (PIDG) company. “It is another example that aligns with our vision to become a centre of excellence for credit solutions for infrastructure finance in lower income countries thereby assisting with the alleviation of poverty.”